Zoetis recently launched its first-ever national, direct-to-consumer television advertising campaigns in the U.S. since becoming an independent company. Two brand-new Zoetis ads started airing on TVs across the U.S. this week, one featuring the company’s canine allergic itch tablet, Apoquel®, and the other starring Simparica®, a once-monthly chewable parasiticide that helps protect dogs from fleas and ticks.

The campaigns educate pet owners and encourage them to speak to their veterinarians about two important issues for their dogs – allergies and parasites – and the treatment options that Zoetis offers for both.

The television ads, which began airing on Monday, April 3, will be featured on major U.S. networks such as ABC and NBC, as well as cable channels including Animal Planet and HGTV. You can also view them here: 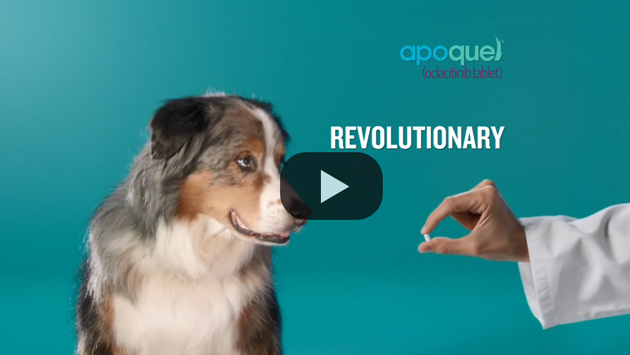 Do not use Apoquel in dogs less than 12 months of age or those with serious infections. Apoquel may increase the chances of developing serious infections, and may cause existing parasitic skin infestations or pre-existing cancers to get worse. Apoquel has not been tested in dogs receiving some medications including some commonly used to treat skin conditions such as corticosteroids and cyclosporines. Do not use in breeding, pregnant, or lactating dogs. Most common side effects are vomiting and diarrhea. Apoquel has been used safely with many common medications including parasiticides, antibiotics and vaccines. See full prescribing information visit ZoetisUS.com/ApoquelPI.

Simparica is for use only in dogs, 6 months of age and older. Simparica may cause abnormal neurologic signs such as tremors, decreased conscious proprioception, ataxia, decreased or absent menace, and/or seizures. Simparica has not been evaluated in dogs that are pregnant, breeding or lactating.  Simparica has been safely used in dogs treated with commonly prescribed vaccines, parasiticides and other medications.  The most frequently reported adverse reactions were vomiting and diarrhea.  See full Prescribing Information at www.zoetisUS.com/SimparicaPI.